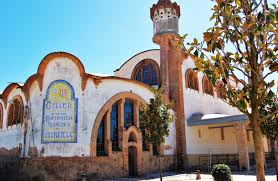 Gandesa is capital of the region, with 2.640 inhabitants. In spite of his industrial and trading growth, unalterable preserve the artistic and historic heritage. The municipal term form an extensive plateau surrounded of mounts, among which excel the saw of Horses and the mount Knight.

The archaeologic deposit of the neck of the Moro, at six kilometres of the capital, preserve three necropoleis of distinct epochs and an Iberian deposit. Gandesa was always a crossing of paths. Like succeeix at most of populaces of the Earth Alta, the first documentation written of the township goes up at 1153, when it was ceded by Ramon Berenguer IV at the templers as a part integrating of Miravet’s big term. One of the more historic facts singled out of Gandesa was the real wedding among the heir of the Crown of Aragon, the girl James II, and Ferran’s daughter IV of Castella, Leonor, a link met like the «farce of Gandesa», since the marriage did not reach consummate never. For his resistance during the first war carlina got the title of «very loyal, heroic and immortal city of Gandesa». During the Civil War, at the battle of the Ebre, the populace was objective of the republicans bet at the mounts of Pàndols and of Horses, that never reached to conquer it.

The ancient core was fortificat until the 19th century. Among his monuments excels the church arxiprestal of the Assumption, constructed during the 13th century, with ornamentation of inspiration Morisco and magnified during the 16th and 17th centuries, moment at what passed at being of Baroque and neoclassical style. The ancient consistorial home is an edifice senyorial of the 15th century, example of the Gothic Catalan civilian. Another notable edifice is the prison, that could being the ancient castle-palace of the perceptors santjoanistes. Date of the 13th and 14th centuries and was reformed the 17th century.

One of the architectural jewels of Gandesa is the impressive cooperative cellar that, like others of the region, was constructed the 1919 for Gaudí’s disciple, Caesar Martinell, tracking the modernist aesthetics.

As a singular place, it is necessary to mention the spa of the Fontcalda, with fonts of mineral waters and termals, and one edificació of neoclassical style of the 18th century.