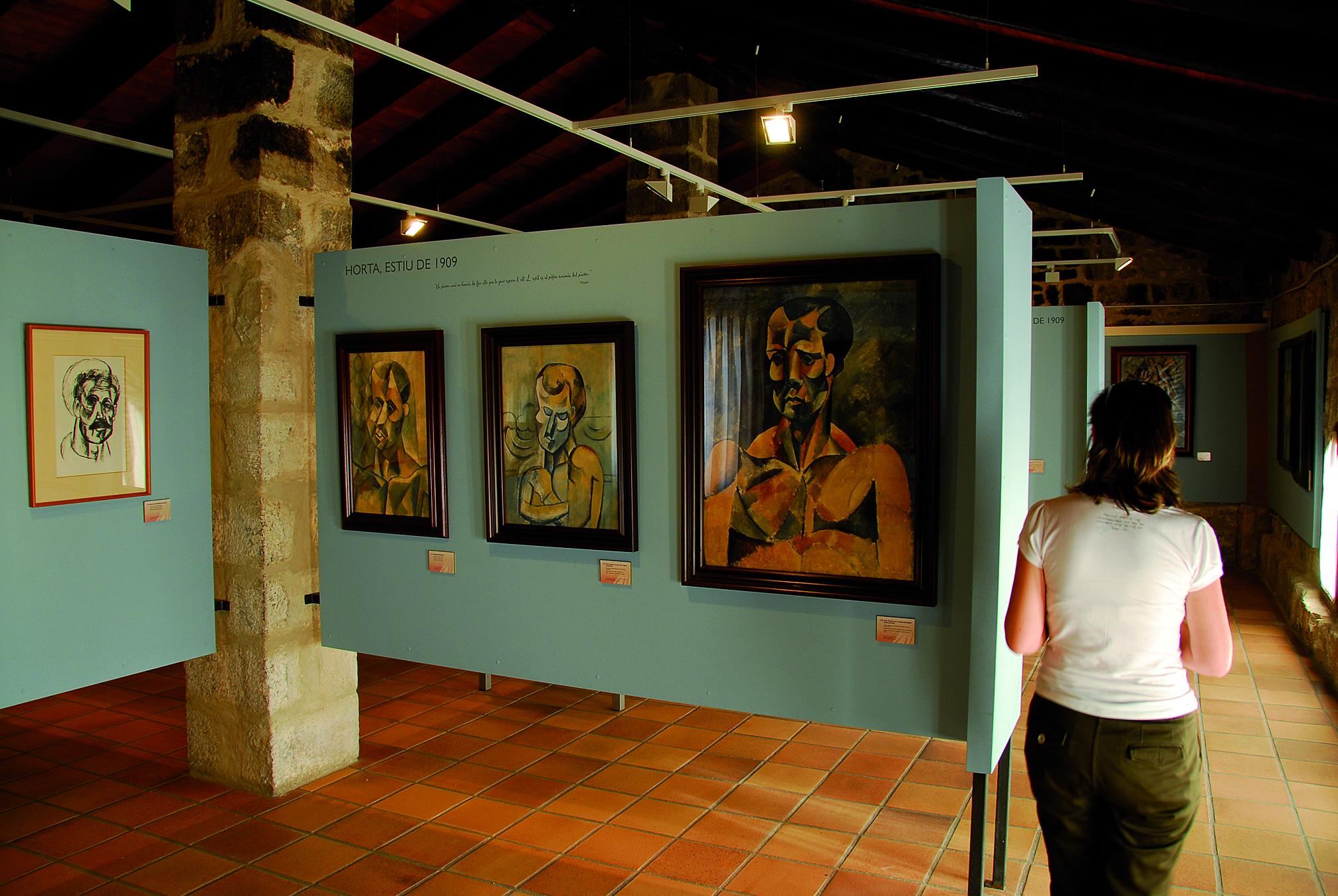 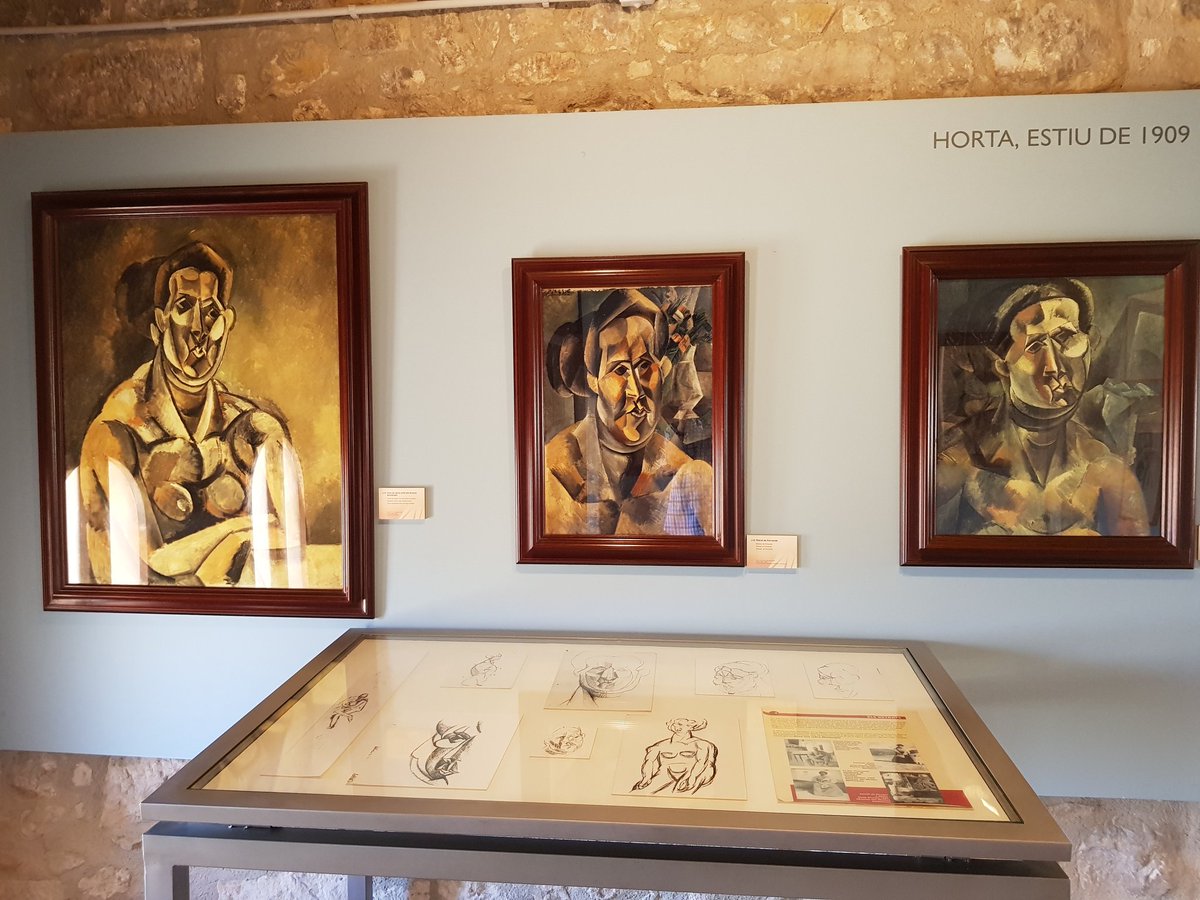 The Picasso Center in Horta wants to be a permanent tribute to Picasso and brings together the reproduction, as faithful as possible of all the works that the artist created in Horta and with which he immortalized this town.

The visitor and the scholar will find inside, a reliable example of the deep ties that unite this land with the great artist, ties that he himself synthesized in the famous phrase:

Everything I know I learned in Horta

Each floor of the building contains different parts of Picasso’s life.
On the ground floor, the strong emotional ties that were established between Horta and the painter are explained through objects, photographs and words by Picasso himself.
On the first floor there are facsimile reproductions of the works made during the first stay (1898-1899) and the evocations of 1903.
On the second floor, the cubist work carried out in Horta in the summer of 1909 and the evocations of the same year made in Barcelona and Paris in the spring of the same year, before returning to Horta.

The PIcasso Center is a three-storey Renaissance building located at the end of Hospital and Raval dels Àngels streets.

The wall that is located in the part of the suburb comes from a wall that saves an important unevenness of the land.
The building has three floors: on the lower part we can see three loopholes, on the second floor remains of coronal windows and on the third a gallery with six arches. The building can be accessed through two doors, one semicircular, vaulted, located on the main facade, where you access the ground floor and the one that is commonly used, and another higher than it is located on the wall facing Hospital Street, where the first floor is accessed.

In this section of wall there is also a small terraced chapel, dedicated to the Virgin of the Forsaken. At the beginning of the 20th century, the building had a small bell tower, now gone, which can be seen in one of the oils painted by Picasso during his stay in 1898.

The first written information we have of the building we now know as the Old Hospital can be found in the aforementioned Rationes Decimarun of 1279, where in the payment of the contribution of the tithe appears the “chaplain Sancti Iacovi” . This chaplain was the owner of the church of Sant Jaume, which at that time was outside the walls of the town.

It is believed that apart from being a place of worship, it fulfilled the functions of a hostel for pilgrims or pilgrims who, coming from Tortosa, followed the Camino de Santiago. However, there are also other opinions that maintain that the Camino de Sant Jaume de l’Ebre did not pass through Horta. This church is believed to have been in a very poor state in the middle of the 16th century, and in 1575 the current Renaissance building was built in its place. Of this primitive church dedicated to Saint James, only one evocation is represented by a painting of the equestrian image of the saint, currently owned by a branch of the Terrats family.

It is from the end of the 16th century when the building serves as a hospital for the poor and passers-by, that is, for charity. In the documents that are conserved of century XIX it was stated that its function was “to welcome poor patients, as much neighbors as strangers”. There was a Local Charity Board that was in charge of managing its operation, and in case of any losses the City Council took care of it. We know, through municipal documentation, that in 1849 there were expenses of 304 rals, of which 112 were for subsistence, 150 for clothes and 45 for medicines. His income for that year was 130 rals, provided by the yields of an estate owned by the Charity known as the Luck of the Hospital, covering an area of ​​161 areas, and which was located at the game of the Crosses.

In 1837, during the First Carlist War, the building was burned by the Liberals, and forty people died inside. Only four walls of the building must have remained because between 1852 and 1853 works were carried out to raise its interior, which were paid for by popular subscription. Once completed, we know that of the three floors of the house, the ground floor and the first floor were used to house the sick, while the second floor housed poor pedestrians.

The estate (Sort de l’Hospital) was confiscated in 1869, and was acquired by the Barcelona surgeon Agustí Meseguer. The hospital is thus losing its source of funding, and this is leading to a decline in its healthcare activity.
We have in a document dated February 1903 the inventory of all the material from the Hospital, which a citizen gives to the representatives of the City Council. It is very likely that this document was the certificate of the end of its existence.
Later, the building was the headquarters of the Civil Guard until 1978.