The old town retains its medieval character with narrow, concentric streets around the now defunct old castle of Orta. To save the unevenness of the terrain, the houses are staggered on top of each other and create a cubist view of the village, seen from afar. The most interesting part of the historic center is the Church Square and the surrounding streets, where we will find the most unique buildings. The Horta architectural ensemble has been declared a Cultural Asset of National Interest and is protected.

It is a medieval building, located at the foot of the mountain of Santa Bàrbara. It is a square-plan defense tower with walls made of well-squared and very regular ashlars. It consists of ground floor and first floor. The main façade faces east. The roof of the ground floor is covered with prismatic stone slabs, without any wooden beams, forming an extremely lowered arch. The upper floor is covered on two sides with stone slabs that support four diaphragm arches, supported by corbels, defining a pointed barrel vault nave. A stone sink is preserved under the window.

You can find it:

It is a cultural centre fortificat in the core of the populace of style renaixentista. It features of low plant and two flats, with cover at two waters. At the low plant opens the cover of arc of half point and several windows blinded. The first flat features of several windows with lintel motllurada and the second flat has a gallery raced. The distinct flats are parted by cornices motllurades, eaves and gargoyles.

It conserves a small cylindrical turret at the angle. The posterior façade presents one mènsula of big dimensions where there had been a big balcony

Originally owed his being of the Comenda of the Hospitalers dependent of the castellania of Amposta.

At the actuality is the «Home Membrado», a private residence at very nice state of conservation, although the interior has gone adapting at the necessities of the owners.

You can find this:

The castle and Horta’s wall of Saint Joan are a pool of edificacions
defensive at Horta’s villa of Saint Joan (the Earth Alta) declared well
cultural of national interest. According to a survey carried out
recently, from the information that contribute the capbreus of the
populace, distinguish two enclosures differentiated corresponding at
the castle and at the wall. It ignores Horta’s foundation, but seems
that it owes his origins at the alarbs tortosins. The first news that
exists of the place and of the castle dates of the 1153, mentioned at
the document of donation of Miravet’s castle at the orde of the Temple.
The year 1165 the king Alfons the Cast awards the first card of
settlement of the Earth Alta, according to the furs of Zaragoza, and at
this same document the king reserves the castle. The 1166 the home of
Montcada possessed the castle, and the 1182 passes at hands of the
templers definitively. The castle was the headquarters of the request
templera of Horta at his onsets, and documents the 1193. The last of
the elements that integrated the castle, the master tower, was
demolished the 1771.

The ancient core is declared well cultural of national interest at the category of historic pool of the that form part: the church of Saint John the Baptist, the conjoint renaixentista of the plaza of the church and the City council of the s. XVI, the Home of the Delme and other homes of style renaixentista. Also it is necessary to excel the Ecomuseu of the Ports, centre of performance of the territory, font of inspiration de Pablo Picasso (“Everything what know, have learnt it at Horta"), that today has the Centre Picasso, private entity sited at the ancient hospital renaixentista, that homenatja the artist and sample the strong links among him and the people. 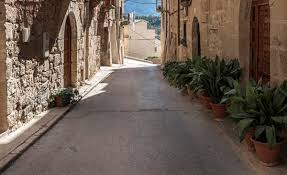 It treats of a pool of style renaixentista formed by two adjoining edifices forming an angle and joined by a body that at the low plant defines a porch. This porch is formed by arcs of half point on columns and pilasters of distinct typology. The façade presents the tidy elements. The two superior flats are parted by cornices motllurades. The first flat has windows of lintel and brancals motllurats and a painting mural in between framed for a moulding.

At the superior flat there is a gallery raced of windows smaller and of arc of half point. The cornice is conformed by lloses of stone everything forming mouldings esglaonades crowned by gargoyles.

Renaissance building from 1580. It was originally a church dedicated to the Virgin of the Forsaken, and later a hospital. During 1837 it was burned by the constitutional troops. Until 1986 it was the headquarters of the Civil Guard. Later it became rehabilitated and adapted as a cultural center, being called the Picasso d’Horta Cultural Center. The rehabilitation and restoration of the complex was carried out in 1986-1988 and 1990-1991, with a subsidy from the Department of Culture of the Generalitat de Catalunya. Since 2014, however, there has been a project that aims to turn the Casa Abadia, next to the Town Hall and the church, into the new Picasso Center, which would increase from 250 to 800 m2 of usable space.

You can find in

Casa l’Habanero is a building in the town of Horta de Sant Joan (Terra Alta) included in the Inventory of the Architectural Heritage of Catalonia. It is part of the set of restored houses in the church square. Renovated and rehabilitated around 1980. Construction of an almost rectangular floor plan between medians, with a structure of three arched transverse bays, based on well-squared stone ashlars. The first of the three floors has an open and common porch with the neighboring houses, with semicircular arches bevelled on pillars of irregular octagonal section and cubic base, one, and of rectangular section with blind corbel the other.

The Domino is a home at Horta’s villa of Saint Joan (Earth Alta) included at the Inventory of the Architectural Heritage of Catalonia. Interesting edificació medieval that does not conserve at very nice state. The murs are of ashlars of stone arrebossats later. The door of entry is of arc of half point adovellat. At the first flat all the openings are balconies, whereas at the second are windows allindades. All the elements of the façade are had with order. It is necessary to excel the shields that crown the lintels of the balconies, as well as the parapets of the windows of the second flat, with human faces and other elements of geometric type. The indoor preserve an own distribution of a medieval home, with two principal cameras that give at the two façades and other dependencies reformed. The scale is of inclination peraltada. Till lately it conserved a small wooden altar worked, today missed. Hom says that it was residence of the friars for many years.

Casa Pessetes is a building in the town of Horta de Sant Joan (Terra Alta) included in the Inventory of the Architectural Heritage of Catalonia. Renaissance building in very good condition, made of ashlar and partly built on the street. On the ground floor, at street level, it has a semicircular arch door and another door open later. On the first floor is the main floor with two molded windows, and on the upper floor a gallery run with cornice under the eaves, entirely of magnificently worked wood. The rear façade has a large bevelled semicircular arch that supports the building above the street facing the Hospital.

The Bellida mill is a building in the municipality of Horta de Sant Joan (Terra Alta) included in the Inventory of the Architectural Heritage of Catalonia. According to the explanations of the current owner, the mill is called de la Bellida because its first exploiting owners were the Bellidos family of Tortosa; family from Huesca. This was in its time one of the most influential and largest owners of tea lands in Horta. It also reminds us of the legend that says that in this mill there was a fight to the death between the two millers, “lo Satret and Mendosa", leaving victorious “lo Sastret".